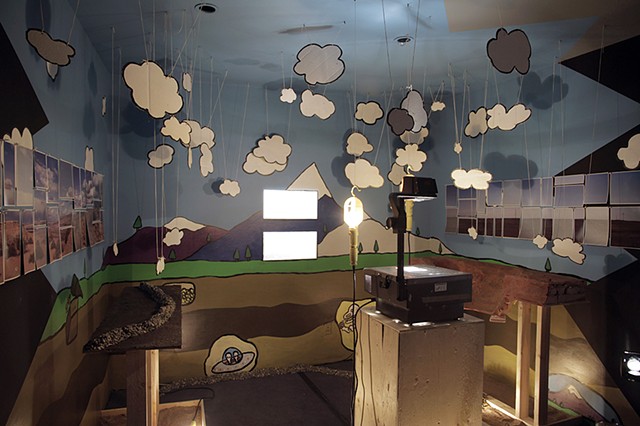 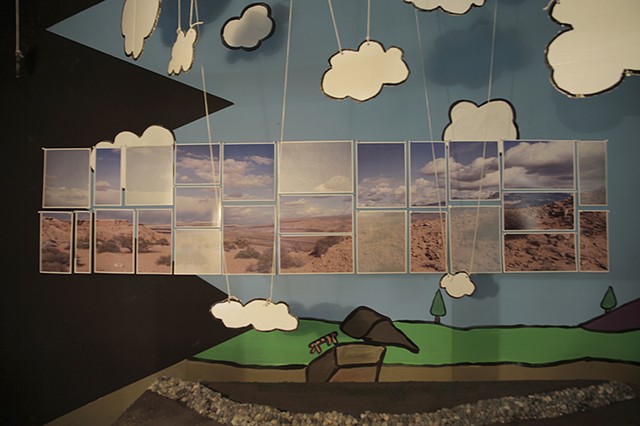 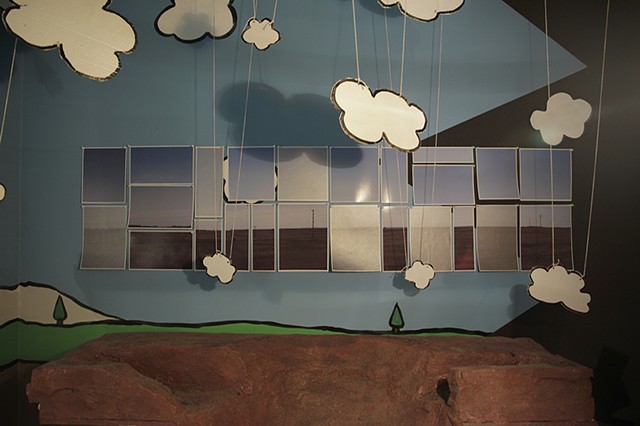 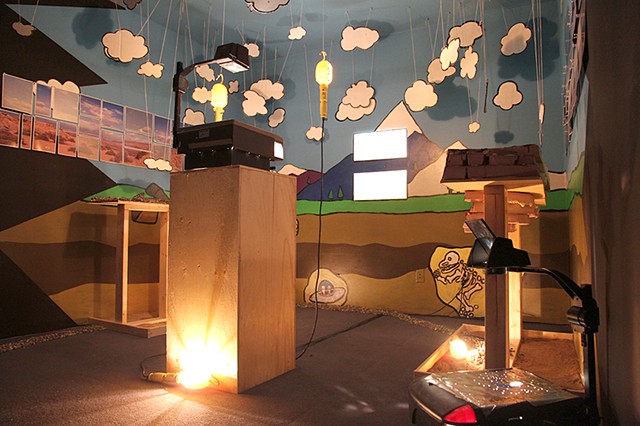 Parallels and Matters of Scale in Jordan Schwab’s “Equal”

Entering Jordan Schwab’s Equal, we’re met with a garishly coloured and highly stylized mural, framed by an idiomatic comic book explosion vignette. Depicted here is a cross section of earth, complete with a buried treasure chest, dinosaur skeleton, and a UFO, occupied by two fossilized aliens that look suspiciously like Kang and Kodos, the extraterrestrial duo from The Simpsons. In fact, this entire subterranean element of the mural appears to reference the underground cross-section trope that appears repeatedly in that series. The iconography carries over into the flattened and unmodeled landscape vista above and in the many cardboard cut out clouds suspended within the space. There is an obviously cartoonish (see Pop) quality here, setting a particular tone for the exhibition.

To the left is a long table whose rough dimensional lumber framework is openly exposed below. On top of the table is a long curving pile of small stones. Another larger, long mound of stones wind their way across the floor below, mimicking the model above. Photographs of a deep valley, rolling hills and mountains rising farther in the background are assembled in a patchwork panorama on the wall behind. In front of the wall opposite is a similarly constructed table topped with a carved and painted foam topographical model of a deep rectilinear trench, the broken but implied line crossing an irregularly shaped semi-circle coulee. There is a photographic panorama on the wall behind here as well, albeit revealing a scene devoid of features. Most explicitly, an overhead projection casts a stacked diptych of light on the middle of the centre wall: one photograph of each site, framed in black paint, cropped and arranged to create a literal equal sign.

Digging deeper (excuse the phrase), Equal depicts two large scale earthworks: Double Negative by Michael Heizer, 1969, located near Overton Nevada, and The Great Wall of Saskatchewan by Albert Johnson, 1962-1991, located 1.6 km west of Smiley, Saskatchewan. Heizer created his monumental work at a time when he and other like-minded artists were actively rejecting what they saw as the regressive demands of commercialization within the Art world proper, creating works which by their very nature are difficult if not impossible to commodify. Yet for all that, creating Double Negative, like all land art, is a massive financial undertaking and its purpose and import are wholly within the concerns of capital ‘A’ Art. On the other side of this equation, The Great Wall of Saskatchewan is the practical result of Johnson clearing stones from his farmland and arranging them in the form of a giant wall stretching a little over a half kilometer. Laying the first few stones together, would Johnson have thought the final results of his labours would be considered alongside the work of a famous artist?

Without access to this background though, would an archaeologist in the distant future, or an alien researcher from a distant planet determine Heizer’s artwork to be the forgotten remains of some practical or industrial process, and Johnson’s wall to be a culturally significant artefact? Presenting this equation: a=b (and conversely: b=a) in the context of an art exhibition, Schwab hits on the self-reflexive question: is this, or is this not art? If a is a duck and b walks and quacks like a duck, we have to do some rigorous special pleading to explain why b isn’t also a duck. The dichotomy is of course false, however. Schwab’s work allows us to take in a diminutive re-presentation of each simultaneously, challenging us to question our own conceits of what ‘qualifies’ as art.

Earthworks inevitably get us thinking about scale, both in terms of size and time. The turn of phrase “the photo doesn’t do it justice” certainly applies here: we can’t really comprehend how massive these things are, (or aren’t - considering Double Negative as a void) unless we’re right there. To put things in an even more exaggerated perspective, standing in one of these places, the actual sculptures are dwarfed by the landscape around them. The view from the mesa above Double Negative in particular is staggering, although there is certainly something equally overwhelming about the vast stretches of empty nothingness that make up the Saskatchewan landscape. In Equal, land art and landscape alike are scaled down to the absurdly diminutive.

Reflecting on the implications for scales of time in this work pushes us headlong into that queasy feeling one gets when facing the enormity of geological time, and measuring our own existence against that scale. Johnson’s wall constructed from glacial till deposited over millennia, the sandstone removed for Heizer’s piece the product of sedimentation of sand from an ancient ocean floor. Double Negative was completed in a year’s time, Johnson worked on his wall for nearly 30 years, and Equal is on view at PAVED for two weeks. Given the very real limitations of scale, time and budget Schwab had to work with for this exhibition, Equal manages to have us ‘see’ something much larger.